Does Tax Reform Mean You Can Stop Paying Quarterly Taxes?

If you have significant income outside of a typical employer paycheck, the answer is probably no.

When you hear “Tax Day,” you probably think of April 15. But there are three other tax days every year, as well: June 15, September 15, and January 15. Those dates — as well as April 15 — are when quarterly estimated tax payments are due. And that begs the question: Should you be paying taxes on those dates, too?

“People often think of income taxes as being paid annually because we file an annual tax return,” explains Aaron Waites, Regional Wealth Planning Manager for Wells Fargo Private Bank in California. “But in the U.S., our federal income tax is pay-as-you-go.” Typically, Waites explains, employers undertake this duty on behalf of employees, withholding taxes from our paychecks and remitting them to the IRS.

“When proper elections are made, this withholding is meant to cover the full annual tax liability plus a little extra,” says Waites. “This little extra is why many people receive a tax refund when we file our annual tax return.”

Those who have substantial income outside of an employer’s paycheck, however, have no one making the payments on their behalf, so the responsibility of shelling out quarterly taxes to the U.S. government falls on their shoulders.

Should you or shouldn’t you?

With the latest tax reform, you may be asking yourself if you should continue — or begin — paying quarterly taxes. In general, if you receive income that is not subject to withholding, then you should think about making quarterly tax payments. This typically includes interest income, profits from stock or real-estate sales, rental income from real estate, investment dividends, and any payment you received for services rendered where tax wasn’t withheld. However, Waites says there are two quantifiable signs that you should be making quarterly estimated tax payments:

How much should you pay?

This can be a tricky piece to determine. “For many high-net-worth taxpayers, predicting their current-year tax liability can be very difficult,” says Waites. “They may have gains early in the year and losses later. A business may generate losses early in the year but turn a profit in the fourth quarter. They may sell a business or large asset, causing taxable income to be much greater in the current year than prior years.”

One rule of thumb — and the requirement for those with adjusted gross income greater than $150,000 (or $75,000 if married filing separately): Pay 110 percent of your prior-year liability in estimated tax payments spread out across the four quarterly tax deadlines. This can substantially reduce the risk of penalties regardless of how much income you earn in the current year. Conversely, if you think your tax liability will be less this year, you can consider paying 90 percent of the current year liability to avoid overpaying.

Could you skip it?

There are a few criteria that allow you to skip estimated taxes, says Waites.

“The last two conditions are met in most cases, but it is rare to have no tax liability in any year,” says Waites. “This requires little to no income in the year.”

Talk to your tax advisor

Waites points out that tax rules have changed and may continue to do so, and typically, the changes don’t make things simpler. If you need help determining whether you are required to pay estimated quarterly tax payments or how much you should pay, consult your tax advisor.

Learn more about the new tax law and what it may mean for investors.

Tax Reform and You

Talk to us about tax-efficient strategies to consider.

Reconsidering Trusts After the Tax Cuts and Jobs Act 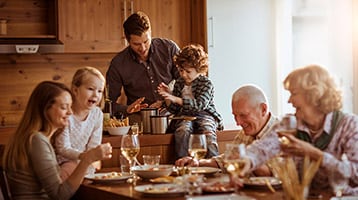 Trusts may be helpful wealth-transfer tools for both taxable and nontaxable estates.
Wealth Transfer